Do you live in a wonderfully characterful home that could be something incredibly special, but lack the skill or the time to painstakingly restore it to its former glory? Then read on to be inspired.

A shabby and run-down exterior does far more than make your property look dilapidated and in a state of disrepair. It’s the opening page on the story of your home and so sets the mood for what you encounter once you pass through your front door.

Exterior redecoration and renovation, then, is incredibly important if you want your entire living space to meet or even exceed its potential, which makes it even more surprising that, once cosily inside, people all too often forget about the outside. They’ll occasionally consider that it’s something that needs to be addressed, but then focus on their rooms, stairways and hallways because those are the places that they spend the majority of their time. 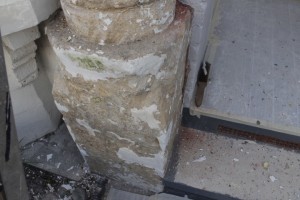 Years of neglect by the previous owners had helped strip this base of a pillar, found at the entrance to a Stoke Newington terraced house, of its protective paintwork. Consequently wind and rain had savaged the naked stonework, and the result was a formless feature that did nothing positive for the approach to the property’s front door. It was definitely in severe need of care, attention, and above all – artful restoration.

We were happy to oblige. 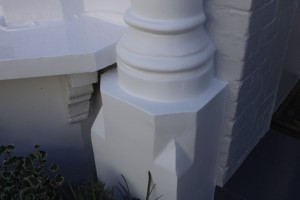 How? After removing the last daubs of flaking paint it was possible to remould and restore its original shape in mortar before a primer and undercoat layer was applied. Then it was a matter of skilfully applying acrylic resin paint which will keep the stonework protected from all types of extreme weather conditions for up to 15 years.

As you can see, the result was a dramatic improvement to the definition of the geometry of the base. Details that were long-since worn away were brought back to life and its integrity has been completely restored. You may want to look back at the first photograph and scroll back down and up again to create your own dynamic ‘before and after’ effect.

With both bases of the pillars restored, re-painted and properly protected against the ongoing assault of the elements it’s possible to get a better picture of the overall effect the work is having on the front of the property. 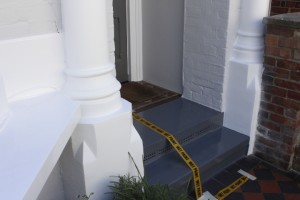 But what about the tops of those pillars? 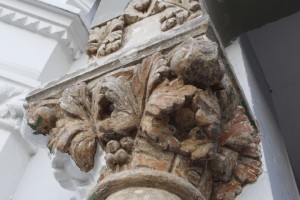 They were faded by the sun and  battered by the wind and rain but had bravely managed to hold their shape over the years. After first carefully cleaning and preparing their complicated surfaces more protective paintwork was applied… 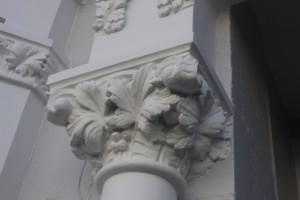 …to totally refresh and re-energise their appearance.

While the tops of the pillars had held much of their shape, the same could not be said for the top of the entranceway, which we brought back to its original fine form before making sure it would be protected from anything nature threw at it over the following decade and beyond. 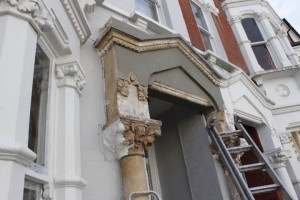 Step back and it’s possible to get a much better view of the vast improvement to the approach to the building. Where once it was deflating and depressing it’s now sharper, livelier, and far more invigorating.

Welcome to your new old home 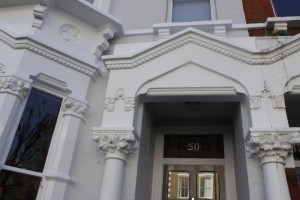 It’s easy to allow the exterior of a property to become worn-out and worse for wear, but with the right care and attention it’s possible to make approaching your property an enjoyable and stand-out experience in itself.

To find out more about how we could help bring your North London property back to life then contact us. We can come up with a plan that will work around your daily schedule and dramatically improve your home’s exterior beauty with the minimum of impact on your day-to-day life.

How To Decorate Your Property So It Sells

Wondering what paint to use? Satin, gloss or matte guide.

How to hang wallpaper like a professional
More posts >>